The Revere Bowl Story begins in February 1768 when Samuel Adams and James Otis, two members of the Massachusetts Assembly, drafted a resolution and a circular letter that were adopted by the Assembly and sent to all of the other 12 colonial assemblies. With indignation, the resolution called attention to the Townsend Acts enacted by Parliament in February 1767. The Townsend Acts were deemed “obviously unconstitutional” because the colonies had no direct representation in Parliament. The circular letter exhorted the other 12 Assemblies to join Massachusetts in petitioning George III to exert his influence on Parliament to repeal the Townsend Acts.

The Townsend Acts provided for import taxes initially on most imports. Amendments to the Acts subsequently included all imports – even tea. Because of their enormous unpopularity, all but one of the Townsend Acts were repealed one by one, but Parliament stubbornly refused to repeal the import taxes on tea. The alleged purpose of the import taxes was to raise revenue to pay for the expenses of the British army stationed in the colonies to protect the colonists from the French and the Indians, and to pay for the expenses of the French and Indian war. The colonists refused to raise sufficient funds and to conscript in sufficient numbers to provide for their own defense-an attitude that would soon change. 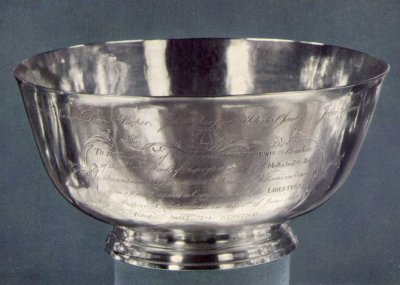 Paul Revere, a silversmith master craftsman, a very successful entrepreneur in several businesses, and a consummate political activist, was commissioned by the Sons of Liberty-a patriotic and drinking society of which he was a member-to design and execute in silver a tribute to commemorate the vote and immortalize the 92 who were courageous enough to vote against rescinding the resolution and the circular letter. Revere was instructed to design a silver rum punch bowl to be made of 45 ounces of silver and to hold 45 gills of rum. Revere engraved the bowl with historical symbols and references as well as with the names of 17 members of the Sons of Liberty along with the numbers 45 and 92 bowl . The design of the bowl was inspired by Chinese commemorative porcelain bowls produced for the American and British markets. After a series of private ownership, the commemorative silver bowl designed and executed by Revere was purchased by the Museum of Fine Arts of Boston with money donated by the school children of Massachusetts for that purpose.

Revere named his bowl the Liberty Bowl, and with it a local tradition was established. Engraved copies of his Liberty Bowl are commonly referred to as Revere Bowls. They are widely used especially by local organizations to commemorate special events or achievements of individuals or organizations.

Engage over 350 attendees as a Sponsor or Exhibitor at any of our educational programs.

Find out more about this exciting opportunity

Providing an unparalleled environment of collegiality and continuing education. NEOS offers its members world-class meetings within a short car or train ride.

Keep up to date with NEOS

Let’s give Retina some love! I hope you enjoyed

Glad to have Grand Rounds back! Thanks to the UMa

YOs at NEOS! Looking forward to an excellent meeti

GRAND ROUNDS ARE BACK in-person at NEOS Dec 10th M

And that’s a wrap! Huge thanks to moderator Dr.

Thanks to Dr. Salim @tuftsmedicalcenter for modera

And we are back live!! Welcome to the @hotelcommon

We are almost one week away!!! NEOS is live at the

We are back in person! Our next NEOS meeting will

Just Days Away for another amazing @neos_eyes meet